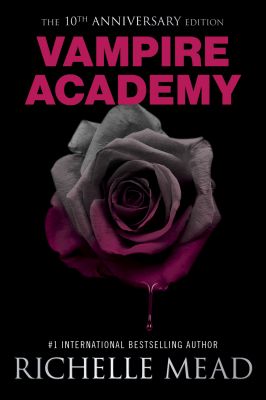 “The Turn and the Flame” – Christian will never escape the shadow of his parents’ crimes, but what really happened on that dark night? In this story, we see the events unfold through the eyes of his aunt, Tasha Ozera. A teenager at the time, Tasha is faced with the horror of what her family has done, the condemnation of the rest of the Moroi world, and keeping her nephew safe at all costs. With love and life on the line, Tasha is forced to make hard choices that will forever mark her and set her on a dangerous path…

“From the Journal of Vasilisa Dragomir” – In the wake of her family’s tragic deaths, Lissa finds both her world and her sanity slowly unraveling. But amidst all that uncertainty, one thing remains firm: the devotion of her best friend. Despite all the risks and rule breaking (because that’s never stopped her before), Rose does the impossible and spirits Lissa away from St. Vladimir’s. These journal entries cover the events that led to their escape, Lissa coming to terms with her strange new powers, and what it’s like to be on the road with Rose Hathaway.

“The Meeting” – We know what Rose thought when she met Dimitri–it was pretty much “no way is he hurting my best friend” and “wow, he’s tall!” (It’s not mentioned in the original text, but she thought he looked pretty good in a duster too). But what did Dimitri experience in that moment? This short story retells the events of their first showdown in the streets of Portland–through the eyes of our favorite badass Russian god.

“Hello, My Name is Rose Hathaway” – Shortly after the events of book one, St. Vladimir’s Academy hosts its annual costumed carnival–and during it, the students run a secret scavenger hunt that involves sneaking around campus and stealing prized possessions from both the school and its instructors. Rose valiantly tries to stay out of it all, but when it comes to funnel cake, a best friend’s plea, and slinking around dark places with Dimitri, no girl can resist.